Will Our B-P Sons Defend the Faith? 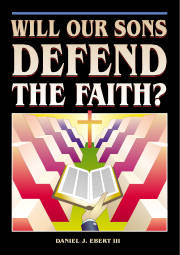 Will Our Sons Defend the Faith? was the title of a good book the Rev Dan Ebert III wrote and published by the Far Eastern Bible College in 1999. There is a real need today for Protestant sons to know the Historic Christian Faith, not just doctrinally but also polemically, in the spirit of Jude 3, “Beloved, when I gave all diligence to write unto you of the common salvation, it was needful for me to write unto you, and exhort you that ye should earnestly contend for the faith which was once delivered unto the saints.”

Reformation is unending and ever continuing. We remember the 20th Century Reformation Movement under Dr Carl McIntire. The Bible-Presbyterian (B-P) Church and all faithful fundamentalists fought hard and well against modernism, ecumenism, and neo-evangelicalism. It was a battle for the Bible, and the battle was fought and won. The doctrine of Verbal Plenary Inspiration (VPI) has become the orthodox expression of our belief in a totally inerrant and infallible Scripture.

The battle for the Bible continues into the 21st century. Now the battle concerns not just the doctrine of VPI, but also Verbal Plenary Preservation (VPP) of the Holy Scriptures. So-called “evangelicals” and “fundamentalists” today are denying that the Church has in her possession a perfect Bible. They claim that the Bible was only infallible and inerrant in the past when it was first given, but no longer infallible and inerrant today. God has inspired His words perfectly, but did not preserve His words likewise. They teach that Christians do not have all of God’s words today, and even if they do, they cannot be absolutely sure where the inspired words are. There is no tangible Word of God that is infallible and inerrant in every way today. Every 4 Hebrew text is impure, every Greek text is impure, every translation is impure. There is simply no such thing as a perfect Bible, no such thing as a perfect Written Standard today. If that be the case, how can we be sure that Christianity is true? If the Bible today contains mistakes, how can we know for certain that our faith is sure? “Faith cometh by hearing, and hearing by the Word of God” (Rom 10:17). But they insist that the Word of God is impure and imperfect today because God did not preserve His words infallibly by special providence. If we do not have an infallible and inerrant Scripture today, then is not our faith vain? Are we still not in our sins? Christians are a most miserable lot for sure (Ps 11:3)!

But our Protestant Confessions of Faith since the days of the Reformation affirm that our Scriptures have been “kept pure in all ages” (Westminster Confession, I:VIII). We have a perfect Bible today, and on the basis of the doctrine of the special providential preservation of God’s words in the original languages, Christians by the logic of faith can know for sure where the inspired words today are found or located, available and accessible (Heb 11:3, 6).

Despite the sure teaching of Scripture (Ps 12:6–7, Matt 5:18, 24:35), and the clear testimony of the Protestant and Reformed Confessions concerning the jot-and-tittle preservation of the Holy Scriptures, many who call themselves “Protestant” and “Reformed” say that the VPP of the Holy Scriptures is a “new doctrine.” They say that God did not promise He will preserve His words infallibly to the last letter and syllable. Those who teach the 100% perfection of the Bible today are branded as “heretics.” They accuse those who teach that the Bible is 100% perfect and without any mistakes as being “ungodly” and “unscholarly.” The godly and scholarly man today is the one who agrees with the so-called “facts” and “evidences” that the Bible today is only 85% or 90% or 99.9% for it contains some “insignificant mistakes,” and has “built-in redundancies.” If asked about whether the Bible today has mistakes or not, the best that Christians can say today is, “There are no mistakes in the Bible that should cause us any worry.” According to deniers of the VPP of the Holy Scriptures, claiming “the Bible today has no mistakes whatsoever” is extreme and untenable.

“If the foundations be destroyed, what can the righteous do” (Ps 11:3)? Our foundations are not destroyed and can never be. May we— as Bible-Presbyterians—remember our Roots, our Book, our Lord, our Work, our Hope:

We are confident that the foundations of our faith are sure and secure. Our foundations are none other than (1) the Living Word—our Lord and Saviour Jesus Christ who is “the same yesterday, today and for ever,” and (2) the Written Word—the 100% inspired and 100% preserved Hebrew and Greek words of the Reformation Text that are incorruptible, unchangeable, and forever infallible and inerrant, that form the basis of all faithful translations of the Protestant Reformation.

As Bible-Presbyterians, we are BIBLE first, then Presbyterians. But certain pastors and presbyters today override the Bible and criticise the Bible they hold in their hands. The question and challenge of the hour remains: Will history repeat itself? Will our sons deny the faith, or will they defend the Faith? O Lord, save us from the apostasy to come!