To Draw a Snake and Add Legs

The attack against the Biblical doctrine of the special providential preservation of God’s inspired words in the original languages to the jot and tittle (Matt 5:18), and the faithful and accurate translation of those words into English in the Authorised or King James Version (AV/KJV) continue unabated. Recently, Dr Michael Sproul, Senior Pastor of the Tri-City Baptist Church and Board Chairman of the International Baptist College in Tempe, Arizona, USA, wrote and published a book entitled, God’s Word Preserved: A Defense of Historic Separatist Definitions and Beliefs. In this book he undermines the authenticity and authority of God’s forever infallible and inerrant words by misrepresenting the Biblical doctrine of Verbal Plenary Preservation (VPP) and writes slanderously against its proponents. He puts words into their mouths and says things they do not say. The Chinese proverb, “To draw a snake and add legs,” describes well Sproul’s libellous work. 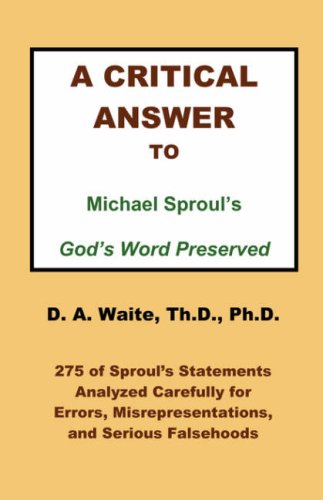 Dr D A Waite has written a book answering Mike Sproul’s false charges and claims. Many of his libellous statements are parroted by anti-VPPists in Singapore.

Presented hereunder are selected portions of Dr Waite’s book—A Critical Answer to Michael Sproul’s God’s Word Preserved: 275 of Sproul’s Statements Analyzed Carefully for Errors, Misrepresentations, and Serious Falsehoods (Collingswood NJ: The Bible for Today Press, 2008). Sproul and those of his fundamentalist ilk have maliciously attacked Dr Waite and the Dean Burgon Society, and sowed seeds of confusion to the faithful witness of the Far Eastern Bible College and faithful Bible-Presbyterian Churches in Singapore which take a stand for the present infallibility and inerrancy of the Holy Scriptures in the original languages, identifying them to be precisely the Reformation Texts (i.e. Hebrew/Aramaic words of the Traditional Masoretic Text and Greek words of the Textus Receptus) on which the Authorised or King James Version (AV/KJV) is based.

It is sad as well as disturbing to see a Christian leader like Mike Sproul spout such lies and display such malice against Christians who believe, teach and defend the Biblical doctrine of the present infallibility and inerrancy of God’s words by the logic of faith. “For we can do nothing against the truth, but for the truth” (2 Cor 13:8).

TR under KJB is the Purest

Sproul’s Statement #53. (p.56) “In his article on DA Waite’s website, Jeffrey Khoo writes, ‘We believe that all the TR editions are pure, but there is one that is purest—the one underlying the KJV.’”

Waite’s Comment #53. Dr. Khoo is the Academic Dean of the Far Eastern Bible College and Theological Seminary and a Bible Presbyterian Pastor in Singapore. I have known him since 1992. I agree with Dr Khoo’s opinion. Does he not have a right to believe, as I do, that the “one that is purest” is “the one underlying the KJV”?

Sproul’s Statement #54. (p.56) “This is a ‘KJV-only’ author admitting that the KJV translators made text critical choices to create a completely new text not in front of them, and was original to them.”

Waite’s Comment #54. This is absolutely false. I explain in Comment #37 and #66 about the Greek text on which the King James Bible translators relied. It was not “a completely new text,” but was basically Beza’s 5th edition of 1598. The King James translators used an existing Greek text. They did not create it or invent their Greek text. Sproul wants so badly to slander all of his opponents, and put them all into the Ruckmanite box, that he viciously lies about the Words underlying the King James Bible so as to lead his gullible readers astray.

Waite’s Comment #55. This is absolutely false! The KJV translators did not “create a ‘new edition’ of the TR,” they merely translated basically from Beza’s 5th edition text of 1598. There is not one ounce of “double inspiration” in the KJB translation. That is Ruckmanite talk! The translators did not believe in this, nor do I, nor does Dr. Khoo [see Jeffrey Khoo’s “Non-Ruckmanite Answers to Anti-KJV Questions,” http://www.deanburgonsociety.org/KJBible/answers.htm]. Only the Ruckmanites believe in it and this is why Sproul seeks to slander people and lie about this matter in order to make Dr. Khoo and me, and all the rest of those who oppose him, into Ruckmanites in order to smear and tar our good names and reputations. It is one of the dirtiest tricks imaginable by a presumably honest Baptist minister of the Gospel!

Dr. Khoo does not believe the King James Bible translators “created a ‘new edition.’” And he certainly does not hold the heresy that Sproul holds that “God inspired the translators.” The phrase, “given by inspiration of God” is a translation of the Greek word, theopneustos. It means literally “God-breathed” as I have mentioned several times above. God breathed out words, not writers, authors, or translators like Sproul’s heresy on “inspiration” believes. Sproul is a Baptist Fundamentalist Christian believer, and yet he is publishing distortions, falsehoods, and outright lies. This is a disgrace!

Sproul’s Statement #76. (pp. 65-66) “Because the translators are declared perfect, according to Waite and Khoo, no one can ever touch the TR of the King James translators’ creation because believers have used it for many years and the blessing of God is evident on this translation.”

Waite’s Comment #76. I do not “declare the translators perfect” and Sproul cannot find anywhere either in print or on tape where I have done so. Nor do I think he can find any evidence that Dr. Khoo believes this either [see Jeffrey Khoo’s article, “Perfect Bible Not Perfect Version,” http://www.deanburgonsociety.org/KJBible/perfect.htm]. But then, liars need no documentation, do they? Just bold and repetitive assertion will do just fine for their evil and wicked goals. The translators had a fallen sinful nature like the rest of humanity. As for “the TR of the King James translators’ creation,” I have said many times earlier, these translators did not “create” a TR, but used basically Beza’s 5th edition, 1598. Sproul is way off on both his facts and reasoning.

Sproul’s Statement #77. (p.66) Quoting Dr. Jeffrey Khoo, the Dean of the Far Eastern Bible College and Seminary, Sproul wrote, “Bob Jones University and Calvary Baptist Theological Seminary, as well as White, Kutilek, Price, and Hudson do not believe in inerrancy and believe that the Bible only ‘contains’ the Word of God.’ This claim is not true. His claim is a sad example of either wilful ignorance or dishonesty.”

Waite’s Comment #77. On the contrary, all of the schools and individuals mentioned above deny that we have the original Hebrew, Aramaic, and Greek Words preserved to this day inerrantly. They claim there are errors in those Words today and that therefore, we do not have an “inerrant” Hebrew, Aramaic, and Greek Bible. Their Bible only “contains” some of the Words of God here and there, but they cannot tell which are the Words and which are not the Words of God. They believe that only the “ideas, thoughts, concepts, message, truth, or teachings” of the original Words are preserved rather than the “Words” themselves. Their “Bible” is one with “scribal errors” scattered throughout the Old and New Testaments.

I Am Not a “KJV-only” Advocate

Second, must the Bible-believing Christians living in the 21st Century be shackled by the beliefs of the so-called “Fundamentalism’s godly Fathers” of the 20th Century if they are in error, no matter how many names are listed? I believe not. I believe the Biblical evidence must be the deciding factor rather than the beliefs of “Fundamentalism’s godly Fathers.”

Third, what was “their position on preservation” of the Bible? Was it the deceptive position of Sproul and those who follow him that holds merely to the Bible “preservation” of only the “Word” of God, but not that of the original Hebrew, Aramaic, and Greek “Words” of God? And as I have written many times above, by “Word” of God, Sproul and his followers mean only the “ideas, thoughts, concepts, message, truth, or teachings” of God, but not His original Hebrew, Aramaic, and Greek “Words.” This is no Bible “preservation” at all. It is rather a denial of it by clever and ingenious semantics.

Sproul’s Statement #210. (p.314 footnote #79) “In Singapore, a tremendous division is taking place over the issue among the Bible Presbyterians. The senior leader and founder pastor of the movement was forced out by those who are younger. D.A. Waite has had tremendous influence in Singapore among these ‘young Turks.’ Satan rejoices and the Spirit is quenched.”

Those who take a pro-Bob Jones University false position in favour of the Critical Text forced Dr. Timothy Tow out of his church. He has now begun another church. Two younger leaders (Dr. Jeffrey Khoo and Dr. Quek [Suan Yew]) are following this “senior leader” and did not “force him out.”

Dr. Timothy Tow and the Far Eastern Bible College and Seminary are standing true to the preservation of the Hebrew, Aramaic, and Greek Words underlying the King James Bible. The BJU followers in Singapore deny and oppose this position.