On July 28 1969, the Rev and Mrs Timothy Tow and their little girl Jemima set off for the Holy Land. It was a five-and-a-half-month long vacation-cum-missionary trip. This was a much needed break and deemed as “an act of God's deliverance” for the pastor missionary, as relationships soured and troubles brewed at Life Bible-Presbyterian Church. Both Dr Lynn Gray Gordon, General Secretary of the Independent Board for Presbyterian Foreign Missions (IBPFM) and the Rev Howard Carlson, missionary in Bethlehem, had extended their invitations to the Rev Tow, in God's good timing.

The Rev Timothy Tow explained how the Pilgrimages to the Holy Land came about:

One big sweet fruit from our self-exile to Israel is the expertise Ivy and I have gained from a knowledge of the Land, and the connection we have made with Mr Gabriel Khano, founding director of the “Guiding Star”, a reputable Tourist Agency. This is on top of our close association with missionaries of the Holy Land Mission of the Independent Board of Foreign Missions. Hereafter Ivy became planner and organiser of every Pilgrimage. When we were in Israel we were comfortably quartered in one of the two missionary flats at Bethlehem, living next to Rev. and Mrs. Carlson.

On our way to ICCC congress in U.S.A. in 1983 we therefore had a First Pilgrimage to the Holy Land with the help of the missionaries in cooperation with Guiding Star. Since the former T.B. Sanatorium at Baraka, 10 miles south of Bethlehem on the Hebron Highway, was now turned into a Hospice for the reception of pilgrims, we gladly made use of this facility as our “Field Headquarters”. There was a double advantage to this arrangement. By staying here we brought some income to the Mission and enjoyed the freedom of conducting religious meetings every night for five nights. We have further fellowship with Palestinian Christians of the Baraka Bible-Presbyterian Church, the spiritual descendants of the missionaries.

Incidentally, the Pioneer Missionary from the Independent Board for Presbyterian Foreign Missions to found the Baraka T.B. Sanatorium and the BP Church at Bethlehem was Dr. Thomas Lambie. Dr. Lambie was also a devout Christian Tour Guide. When the ICCC visited the Holy Land in 1950, he enlightened us on many things we did not know. He was most delighted to speak on Golgotha and the Garden Tomb. The faith Dr. Lambie imparted to our Palestinian brethren is no different from our B-P Faith.

A reciprocal blessing to our Palestinian brethren is not only the love gifts we present them for their muchneeded support but also a piece of land we bought for them in our 1987 Pilgrimage at Beit Sahour where most of the congregation stayed. How delighted they were at the prospect of building a little Church of their own, but being too close to the Greek Orthodox Church they were ousted, like the lamb drinking downstream was accused by the wolf upstream of muddling up the water.

Hitherto, our Pilgrimage was limited to Israel and Jordan, but from the Third to the Ninth Pilgrimage we extended our tour to include another country at little extra charge. So we have included Egypt, Greece, Rome, Switzerland, and London from 1992 to 1999. Egypt gives us a glimpse of the Pyramids, the mummies of the Pharoahs, but most exciting the climb up Moses' Mountain where God gave the Ten Commandments. Greece shows us the Parthenon and Mars Hill where Paul preached and the ruins of Corinth. Rome has St. Peter's Church and Vatican City on the one hand and the Colosseum and Catacombs on the other. Geneva, Switzerland beckons us to the Reformation Monument and Calvin's Church, St. Peters. (We had the opportunity of worshipping here--I had the privilege of preaching from Calvin's pulpit.) The reason why we visited London, May 4, 1997 was to swell the congregation at the Dedication of the New Life B-P Church. We are avoiding the year 2000 when 4 million will invade Israel. If God be willing, we hope to go on a tenth Pilgrimage 2001, year after the Millennium Bug.

The Rev and Mrs Tow continued to lead three more Pilgrimages to the Holy Land until 2008 when the baton was handed to Dr and Mrs Jeffrey Khoo. 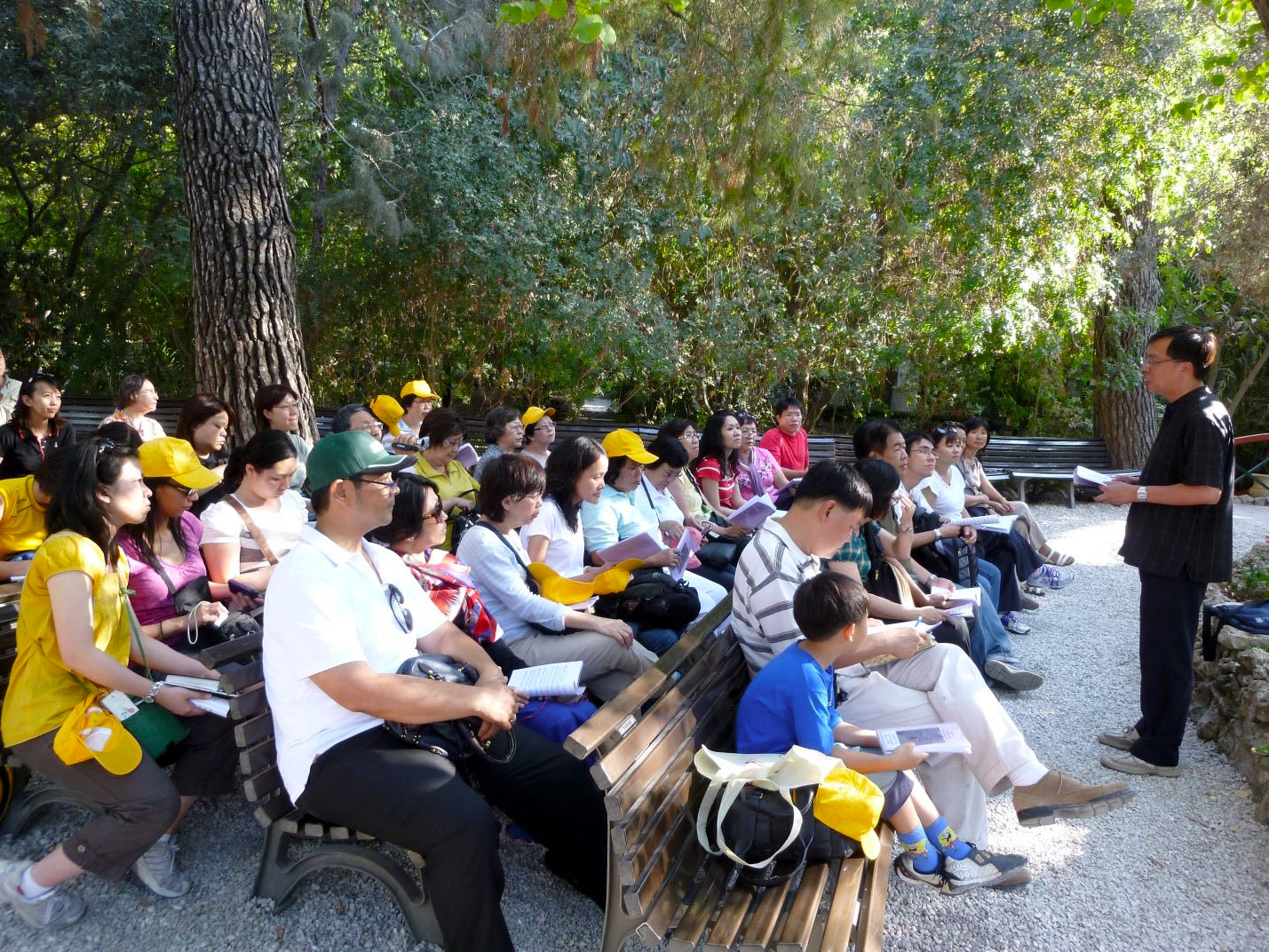 Worship Service at the Garden Tomb

At the Reformation Monument, Geneva, Switzerland